After 15 years at the Liverpool World Centre, Pablo Guidi is stepping down as Director to take up a new position with the Archdiocese of Liverpool. Pablo started with LWC back in 2007 as the centre’s first Coordinator/Director. Since then, Pablo has successfully guided the organisation, as he says, “supported by a fantastic team and committed set of trustees”. Pablo continues:

“I can only thank the fantastic people who I’ve worked with over the years, as they are the ones who truly made LWC what it is today. It’s been a privilege to work with such committed volunteers, interns, staff and trustees – all passionate about realising positive social change. As a result, I’ve witnessed the impact on thousands of school children and their teachers, and seen transformations take place that are inspirational. These happy memories will stay with me for the rest of my life.”

Pablo’s move is part of wider reorganisation for LWC as it repositions itself to build on its 22-year history and continue to make positive social change in 2023 and beyond. LWC will extend its collaborative working model fostered by Pablo, to establish a new Co-Director model of leadership, with Karen Wynne and Andrea Bullivant jointly taking up the director role. Speaking about the new model, Pablo says:

“It’s so exciting to see the team think creatively about how the organisation should look in 2022. Not only are they seeking to respond to the challenges ahead, but also to embed the ethos of collaborative leadership into LWC’s own working practices. I know that LWC will have a great future with Karen and Andrea taking up the role of Co-Directors. While I’m sad to been leaving after 15 happy years at the Liverpool World Centre, I’m proud to be handing the baton on, I can’t wait to see what is next in store for LWC.”

Sara Parker, Chair of LWC Trustees, thanked Pablo for all his work on behalf of the trustees:

“I want to congratulate you formally on your new role which sounds just perfect for you; and you are certainly our loss, their gain. Your work at LWC has been central to the success of the organisation and we look forward to planning the way ahead for LWC without you at the helm. I know you will support us in this endeavour.”

Over the next few weeks, there will be an update from Karen and Andrea on the new model. In the meantime, sign up to our socials and newsletter for more information. 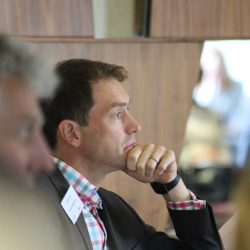 Pablo Guidi, pictured at a meeting